There were 25 Volunteers on site today. The weather was a little showery but a lot of jobs, previously put on the "back burner",  were tackled.

A big effort by Rod on the strimmer/brush cutter ably supported by Martin, Tony, Paul , Ian and Steve on the dumper saw the driveway and area on Evesham side of the Station Road bridge cleared of many weeks of vegetation growth. 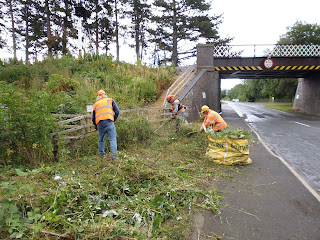 The team in action. Many "dumpy"
bags were filled with vegetation 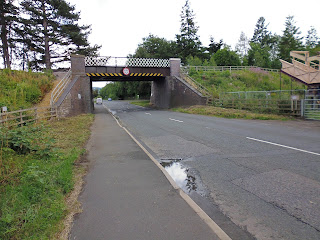 The approach to the Evesham Road bridge, from the west, after the clearance had been completed. Just in view on the right is one of the footbridge staircases.

On the Broadway side of the south wing wall Ian and Paul cleared some weeds out of the mortar between the brick work. It is amazing how they take hold 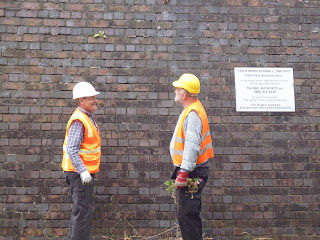 This was one of the larger flowers that had taken root and later
removed. A swift end to the hanging gardens of Broadway.


At the top of the driveway Vic was busy weeding his beloved flower border. At this time of year it is in full bloom and an excellent sight. 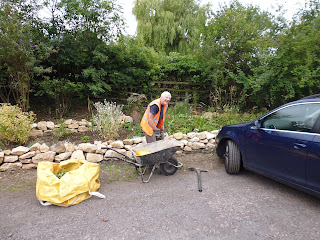 Chris and Gordon beavered away digging the ground where it is planned to sow grass seed and provide a picnic area for our visitors. 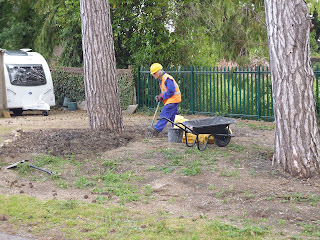 Clive was busy securing some more shelves in the bric-a-brac shed. The display here is most impressive and all the shelves are now full. More may be needed in due course! 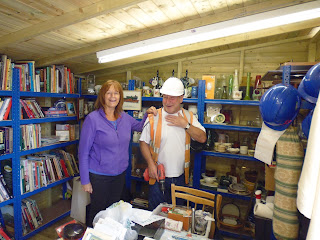 The footbridge main span team of Roger, Brian and Ron were hard at work chipping off paint on hoops that form the roof supports on the footbridge. It is a very dusty and noisy job hence the breathing masks and ear defenders, 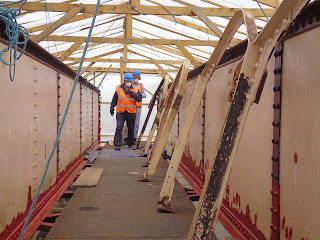 Working in the "cocoon" that surrounds the central footbridge span can very extremely warn in summer but very pleasant in winter!
Last but not least Graham, Mike and Peter Q were hard at work in the operating room of the signal box. 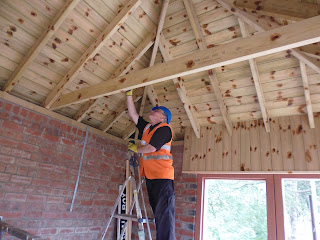 ﻿
Mike is sealing the knots on the roof woodwork with patent knotting prior to the timber being primed and painted. It was a very arduous task but by close of play Mike declared every knot had been treated - no mean feat. 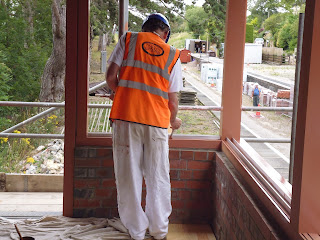 We are very fortunate in having Graham with us on site. He is a professional decorator by trade and has done a superb job on the signal box paintwork. The north end window frame is receiving its final coat. 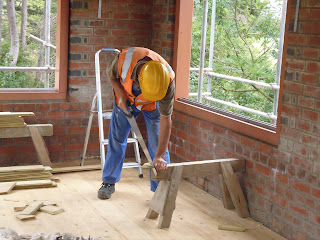 Peter Q, our master carpenter, was busy finishing off some more work on the beading..
And finally a signalman's view from the box of the track bed looking south. It will be a fine sight when the track is laid.- something to really look forward to. 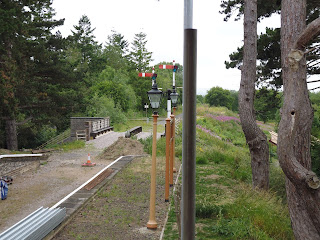