The End of an Era

This day became the last working Wednesday for BAG. From now on train services will be running on Wednesdays so for a while Mondays & Fridays will be the irregular working days until the outstanding jobs are completed. Many of the 40 or so BAG members will continue to volunteer for the GWSR in various departments, according to preference & needs of the departments. We are a happy group who have enjoyed working alongside folk from all walks of life. We hope that it won't be too long before we are called back to further develop the Broadway site, when funds become available.
For my little survey 20 members responded. Their average age : 69.75yrs. Their occupations, as one could have guessed, were very varied : 8 white collar, 12 blue collar - is that politically correct? no! Well amongst those 20 there is 1 school teacher, 1 civil servant, 1 prison officer, 1 professional painter, 3 from the insurance world, 5 professional engineers & only 1 builder!

Monday recap:
Monday's weather was glorious and enabled repainting of the white line along the edge of platform 1, continuation of slab laying to the North side of the station building plus erection of signage posts behind the parking bays. Peter Q, Clive & Paul virtually completed the re-erection of the sales shed. 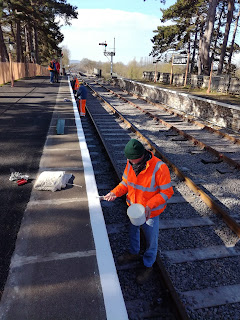 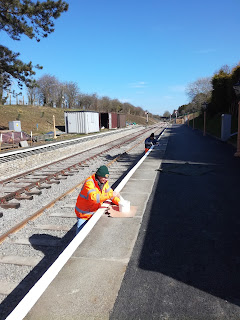 Rod with the petrol driven auger, assisted by Keith & Ron preparing holes for the sign posts. 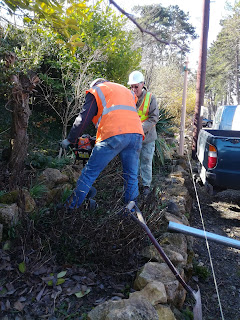 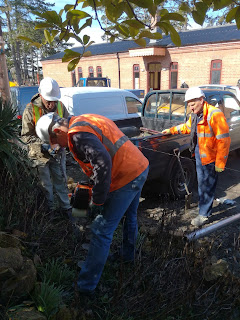 With special mortar supplied by Keith, Terry & Bob get on with the slab laying. 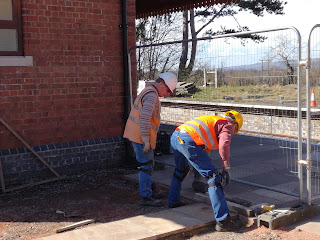 Wednesday:
Wednesday's weather could have been a lot kinder as a send off for the 24 volunteers who signed in. Awful conditions prevailed through the morning & it was only after lunch break that the welcome sun & some warmth

An early delivery of cement & pea gravel from Richard of Fairview. 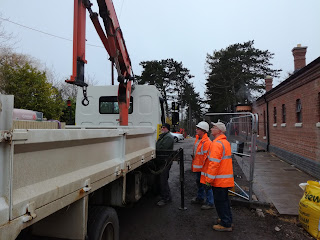 Mike T & Mike S kept busy in the dry, touching up around the building, where necessary. Here we see Mike S with a steady hand on the crowd barrier posts. 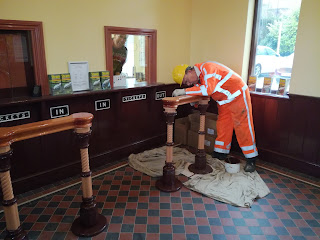 The weather has improved and Rod & Ron are further down the driveway now, preparing another hole for another sign ! 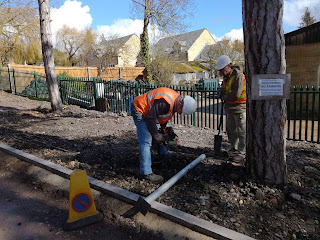 Yes Keith, that's where you should be, helping Peter K with that post hole. 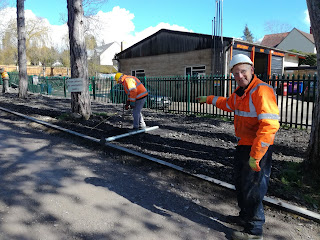 No lads, that one isn't for moving ! 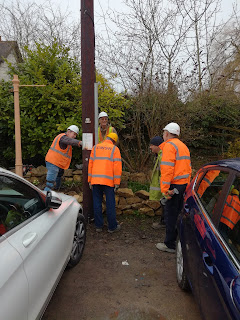 Peter Q finishing off the facia panels on the shed for Julie's shop. It is not intended for this to be a permanent feature on platform 1, as long term the shop will be sited within a station building. 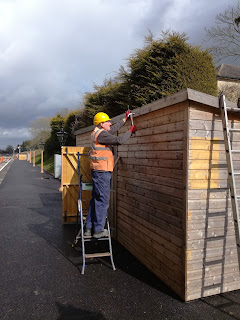 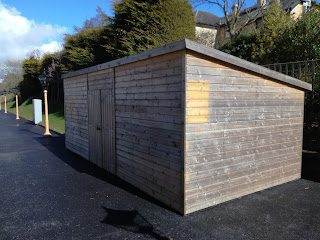 Stevie W chatting with Chris after setting in place the barrow crossing at the North end of the platforms. He had been assisted by a group of permanent way volunteers who were also employed in tidying ballast off the sleepers. 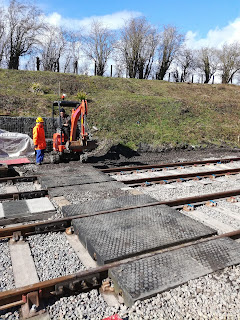 Signs of the times! There a lot of signs going up the driveway as well. I could easily join the group of "whingers". 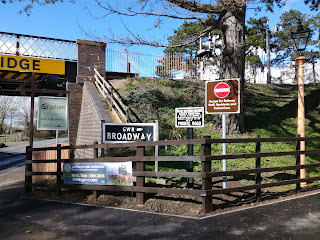 Well that's all folks, from me. Hope to see you at the Opening Day, Good Friday or Easter Weekend.