The early birds arrived at Broadway to find a light dusting of snow and a temperature of -4C , but we are volunteers so nothing will stop us, well that`s what we thought. 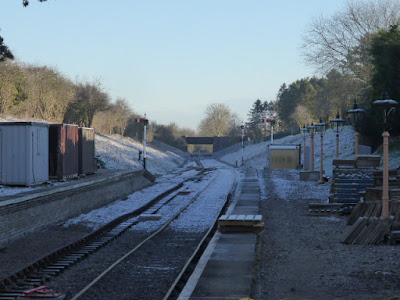 First thing in the morning and the end of the northern platforms shows a light dusting of snow, odd that it started just after the pallets on the platform.
A couple of jobs on the go today, mainly because the volunteer numbers only hit 15.

The footings for the staircase landing support and the canopy legs have had their fixing bolts enclosed for protection, as the photo below shows. 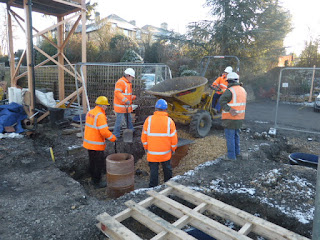 Now the back filling started on the landing supports.

The drainage for the staircase will go towards the canopy support and then into the previously installed underground drainage pipe. As ever can anybody remember where it is , "It's down there somewhere " 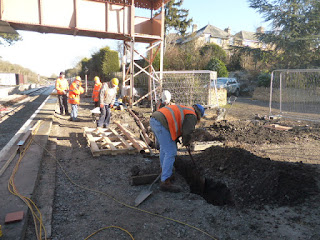 Martin and Clive's mission was to find it and dig it out. The ground around this end of the building has seen no sun for days and it was as hard as concrete. Both mini diggers were busy elsewhere so picks and spades were the only tools available.

But perseverance paid off and the buried end of the pipe was found, further bends, T pieces and  joints were acquired and the pipes joined up. The pipe coming in from the left is the drainage from the bridge roof via the previously installed drop pipes. These pipes were then covered in sand and then the area was then covered over with spent ballast to level out the area.

At the other end of the station building another team, when they could prise the frozen slabs apart!, completed two rows. These will be extended around the corner towards the front of the building at a later date. 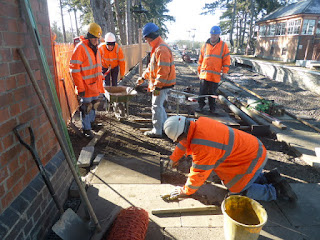 Bob on his knees "again", Terry with maul, John S with Keith and Paul supplying them with the slabs and mix.

On finishing this area they reverted back to the slab laying on the platform .

Elsewhere Mike the only, painter on site, gave the running in board a coating of light stone.
Later he moved outside to painted the lamp tops with another coat of black. 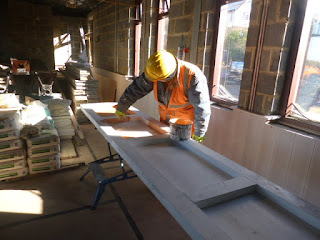 Peter Q and Dave H sorted out the lettering for the said running in board, trying to work out an invisible way of fixing the lettering to the board. 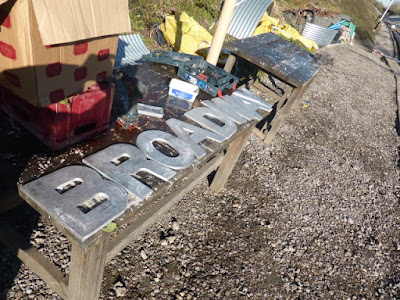 Trouble is they are all not the same, some are solid, some are hollow and some are hollow with spacers. A method was agreed and next time we will see if it works.  Later they moved on to dividing plywood sheets into three, ready for the cafe area, a much simpler task.

The two mini diggers were on the go most of the day, one driven by John C filled the dumper which helped in the infilling and the leveling north of the station building, whilst the other was driven by Stevie our contractor.

Building services were also on site today, their job was the slabbing of the front of the station building. After their usual discussions and sorting of materials they had by the end of the day made a good start. 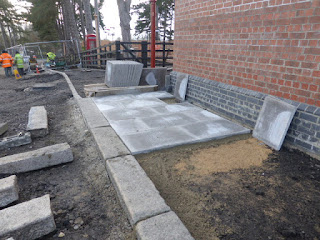 Building & Services have offered their help in the plumbing work in the toilets. They started on Monday and have made a good start on fitting out of the Gents, a row of period looking sinks have now appeared. Looking very impressive. 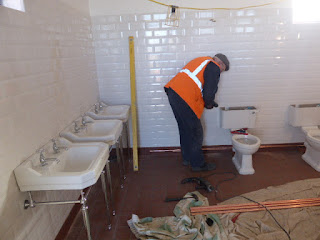 Posted by David Holdsworth at 11:32