It was a very mild dry day with light winds. This was all before the predicted storm Caroline which was due arrive in the UK that evening. There were 25 volunteers on site today on a variety of jobs. 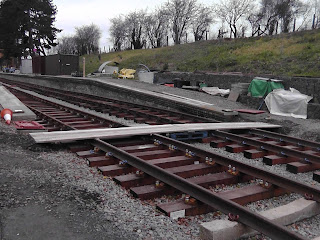 This 'footbridge', installed last Monday, proved very helpful when wheeling a barrow from one platform to the other. It is an unofficial barrow crossing and will be replaced by an official crossing  once ballast has been dropped onto the track. The Heras Fence along the proposed car park area had been pulled over thus blocking the permissive footpath most popular with dog walkers from the caravan park. Chris and Vic took the project on, to re-erect the fence and then add supports in the hope that this wouldn't happen again. Building services had left some wooden stakes for that purpose, but because the ground here is full of rubble and very hard to penetrate, that idea had to be abandoned. The decision was taken to erect fence panels in a triangular formation attached to the main fence to add weight and give support, hopefully preventing its instability. 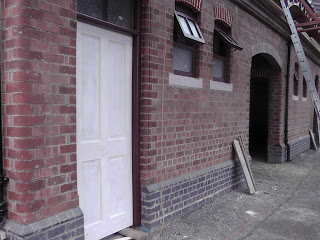 I mentioned in last Saturday's blog that Neal was working on a door. Well here it is fitted! There was also another door in the next room - not idle this fellow!! 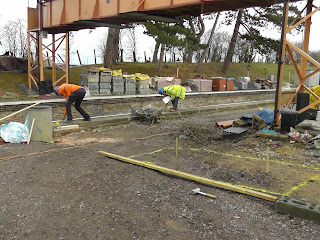 Here Neal and John Balderstone, our bridge engineer, are measuring and marking out the footings for the eventual fitting of a canopy extension to the roof and the footbridge steps. 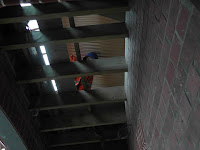 John S was up in the roof area fitting more boards. 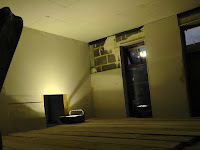 The two plasterers were in the Entrance Hall fitting wall boards, whilst in this second picture the Ticket Office is finished. 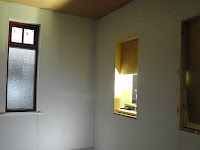 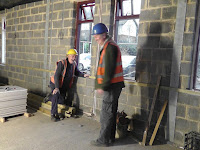 In the Tea Room our carpenters Peter, Brian T and Dave H were fitting battons to the wall. 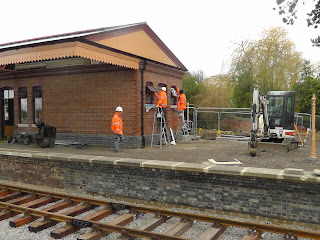 On the outside of the Station Building the three (Musketeers) painters were giving the windows another coat. In this picture is Mike and Graham, whilst Mike S is around the front. 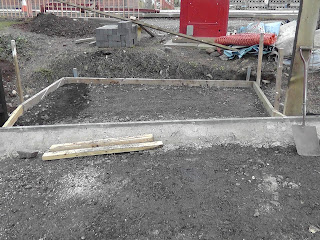 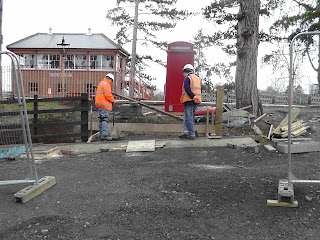 The base for the telephone box had been started on Monday with the laying out of the boards, so today the concrete was barrowed in with Bob and Clive levelling it out. 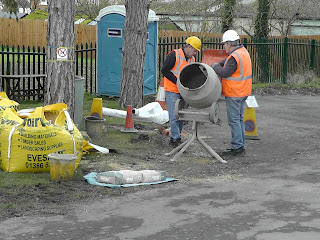 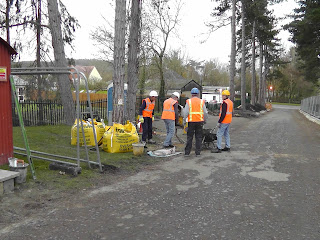 The mixing team started off with Rod and Terry, they were then superseded by Paul, Keith and Dave as Rod and Terry were engaged with erecting a lamp post.
Here John C with the mini digger places the lamp post in the prepared hole in the ground. 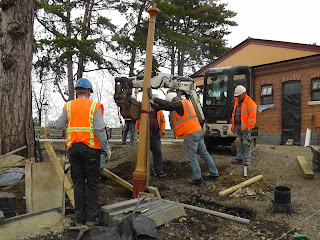 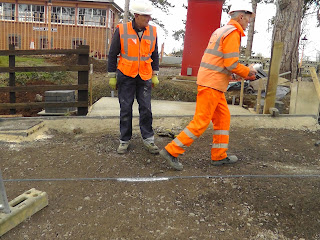 Gordon and Keith are preparing the line for the final kerb laying, marking out with coloured paint for guidance. In the background the concrete base has been finished and once set the Telephone Box can be moved down. A wall of blue bricks is to be built around the base.


Other members on site but not photographed were Brian M on the embankment clearance, Tony and Dave B organising the work teams. At the morning tea break Alan Miller came to communicate the latest arrangements for Broadway Station.

Posted by David Holdsworth at 11:52