More of the Same on a Cold Day

It was a dress up warm day for the 23 hardy volunteers that turned up today, for the wind that usually blows across the fields from the south was in complete reverse and blowing down the track bed from the north, but a pleasant enough day though, especially for those with the heavy manual jobs.

Last week saw the removal of the hut and in its place was appearing a coach pull in area. 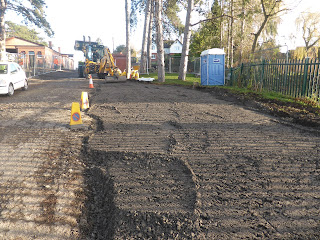 Steve and his trusty JCB had previously cleared an area, then filled it with spent ballast then spread type 1 onto that and levelled roughly. 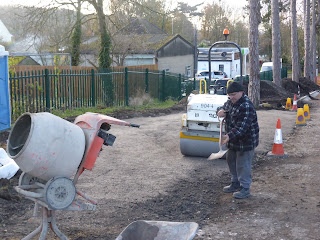 Using a mini roller it was flattened and by the end of the morning it was being used as an area to park a few cars.
Later Steve used the same roller to re flatten platform 1.

On the other side of the drive it was the team of Rod and Terry. With help of others they were laying  the edging slabs following the line of the fence towards the station building. 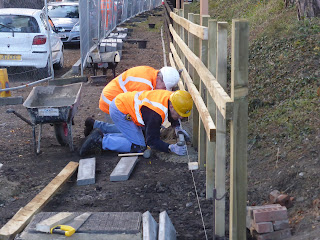 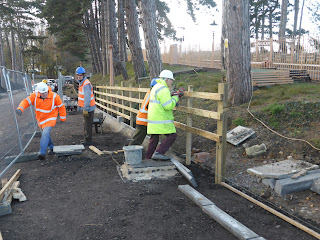 The horizontals on the fence were being attached by Vic and Steve.

Higher up the drive a hole was extended to try and find the underground power feeding the nearby houses. Later this week the power company will connect the station building to this feed .


At the Station Building

Dave H and Brian were making new window beading, several pieces have been lost since the fitting of the windows and having sourced the right size and shape they were then cut to length and new bevels cut to match the existing.


Elsewhere Graham and the two Mikes were second and maybe third coating the window frames.

Up in the roof space John S and Peter Q had started the installation and boarding of the station building.

Not much room below the roof,  the layer of insulation had to be a certain thickness to comply with building regulations. To get the correct thickness an additional joist had to be inserted as seen in the second photo.


Not an easy job, especially for those with dodgy knees and bad backs!

The early part of the day saw the erecting of the trestles and boards in the booking hall ready for when the plasterers make a start on it on Saturday followed by the store room and the booking office. Cafe and Kitchen areas will be left to the New Year. 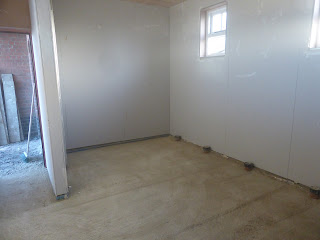 And finally a picture of what will be the Ladies toilets after the trestles had been removed now just waiting for the final skimming of plaster.
Posted by David Holdsworth at 09:33