Say it with flowers

Quite a turnout today with 17 volunteers signed in at some time during the day. The expected rain did not become serious at Broadway until the day's work had more or less been completed.

The most important job today was to take advantage of an offer by Dave from Lenchwick of quality 3 x 2 paving slabs, which have been used elsewhere, and the offer of a suitable vehicle to move them. It is planned to lay the slabs on the platforms between the station buildings and the coping slabs.

We are really fortunate to have been offered these slabs so we needed to move fairly quickly to recover them to enable the donor to press ahead with his own redevelopment plans. We are also very lucky to have someone like Paul, the owner of Tecton Timber Products, who will let us make use of him and his lorry at these crucial times, thanks Paul


Four volunteers spent their day on this job as each slab had first to be lifted on to the pallets that had been taken along for this purpose before being loaded on to the bed using the hydraulics on the vehicle. A couple of journeys were made today and it is estimated 90 slabs now sit at Broadway which is approx. half of the total available the rest coming when Paul can next spare the lorry. We have also been offered similar quality 2 x 2 slabs which will complement the 3 x 2's.


The four guys on this job certainly knew they'd done a days work when it was all over, well done fellas.

Elsewhere around the site, 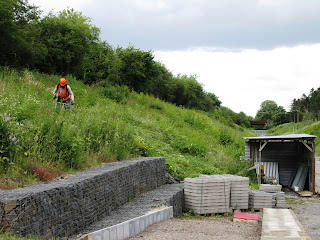 Roger and Keith continued the never ending job of keeping the weeds and grass under control. 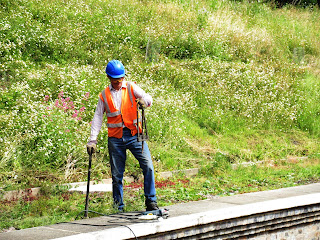 Roger, the hunter, back from the jungle and showing us his prize specimen. There certainly are some lethal telegraph pole stays out there and that's a fact! Joking apart strimmers always come off second best after an encounter with these so it is worthwhile taking the trouble to get them out.

While on the subject of plant management, we were kindly given a selection of bedding plants today by Orchard Nurseries in Broadway. 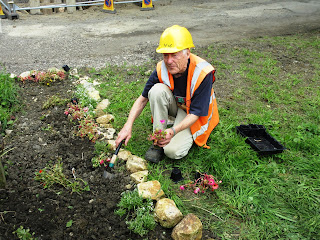 Vic wasted no time in giving the plants a good home, in time for them to benefit from the heavy showers which came later. The flower bed is at the entrance to the drive. 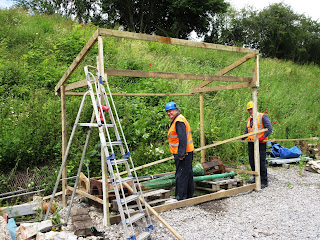 The Carpentry Dept, in temporary suspension regarding the footbridge while waiting for the first of the roof panels to be available for fitting, turned their attention to creating a work shelter to enable the three GWR type 2 lamp posts, lying on pallets, to be cleaned and repainted before erection, sometime, at the top of the drive. 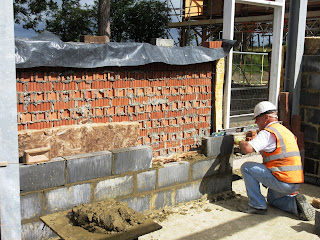 Clive spent the day building the platform side internal wall in the gents toilet, as can be seen the north end wall is up to cill level. There will be windows in the toilets but they will be much smaller and pitched higher up than those in the other rooms. 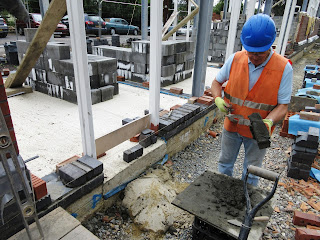 Only one person laying bricks today but at long last a start was made on the missing middle section of the station. Most of the morning was spent laying red facing bricks to complete courses on the north end but the last two or three hours saw a return to blues. This is on the platform side and is the first course above the damp proofing, approx. half a course was possible before a compulsory early finish.