There is a little bit of treading water on the building front while waiting for the weather to turn favourable for the concrete pour. Even so 15 volunteers found enough to do today to keep the show on the road.

The main focus of activity was the footbridge span..... 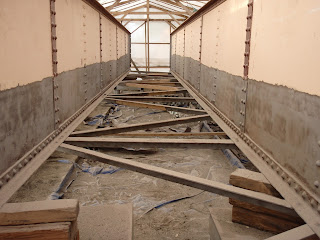 ....where the removed paint and rust from Wednesday's shotblasting needed to be cleaned up. This was the situation facing the cleaning gang first thing, the blue tarpaulins covering the ground can just be made out beneath the layer of dust. The marked effect of the blasting on the bridge is obvious, lower half cleaned top half still to be done. 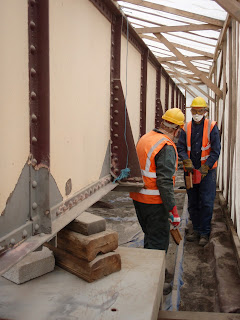 This was a 'must do' job for today because the repairers are due on site in the coming week to start the remedial work. This will be in the areas where the old paint has been removed.
By the end of the day the gang of Robin, Peter K, Roger and Jim had filled all the receptacles on site and had had to make an emergency purchase of dustbins from a well known DIY store during the day to keep the job going. 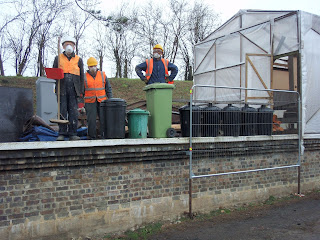 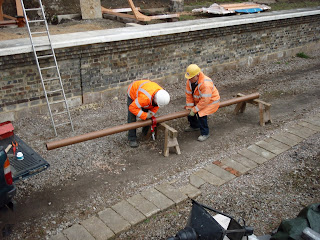 Another job associated with the footbridge that was started today was making provision for the rainwater from the bridge roof to escape to the drains.

John is cutting a length of pipe, using the professional method of pipe cutter rather than hacksaw, so that it forms part of the assembly at the base of the towers where the rainwater downpipes will reach ground level. Tony seems to be getting in some practice for the forthcoming National Hunt festival at Cheltenham Racecourse. Don't think its got much of a chance Tony! 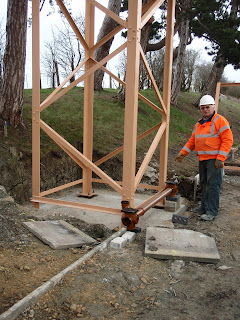 John is pointing to the first of these assemblies in the position where it will be used and maybe giving an explanation to the photographer of how it will work or could be saying 'who put that there'!

There is a bit more to do on the drainage front to get the pipework down to ground level to meet the drains. 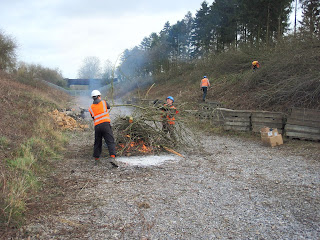 The arisings from Brian M's sterling efforts with the saw continue to provide a continual stream for the bonfire. Steve and Peter S feeding the fire while Vic and Dave drag the branches down the sides of the cutting. Dragging the branches down is surprisingly difficult but worth it to keep the area reasonably tidy. Brian is now within sight of the northern boundary fence just in front of Springfield Lane bridge seen in the background. 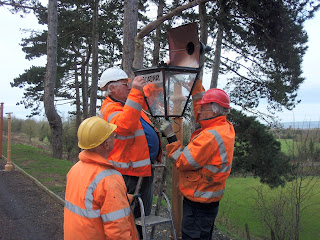 With three of the platform 2 lampposts now firmly in place the opportunity was taken to fit one of the tops. As well as looking good at the top of the post it is better there than in store where it might get damaged. John and Jo are lifting the top on while Tony is assisting the process with an 'up a bit, left a bit'. All three later trooped off to carry out some much needed site clearance using digger and dumper. 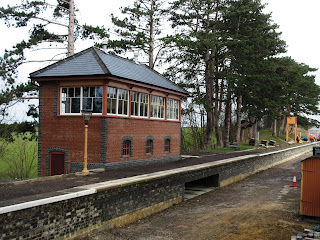 The newly installed and kitted out lamp close to the signal box. The signal box nameplate might be fitted this coming week so watch this space