Welcome to the new Broadway Area Group Blog, our aim to provide you with an update on the excellent work that is going on at the Station.

While we have been "off air" much work has continued on several projects.

There were 25 volunteers at the Station today. 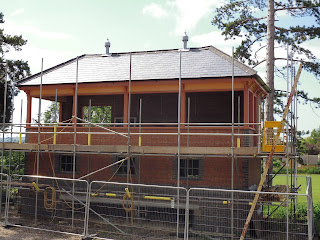 Above is a picture of the structurally completed signal box, previous photos may have shown windows in the left hand end but these were removed today to allow painting of the frames by Graham and Mike. Paul and Keith have spent many hours cleaning surplus mortar off the brickwork while the scaffolding is still in place. We were hoping the windows would be fitted today but we understand the carpenters will be now be fitting them on Friday. More news on this hopefully next week 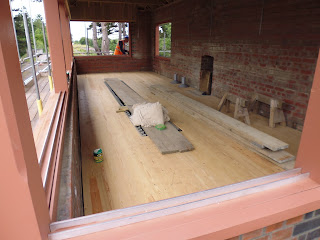 The operating room floor inside the signal box is now complete and looks superb, this is the handy work of Peter Q and John S. The boards in the centre cover the lever frame and the fire place can be seen on the right of the picture
The construction team are to be congratulated on a really superb job! 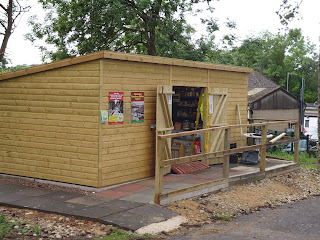 Julie's excellent bric a brac area has now been relocated further down the driveway. With new shelving, many items previously not displayed are available to obtain for an appropriate donation. There is an excellent section of railway books, many virtually new. Please call in to have a look at them and other very interesting items. 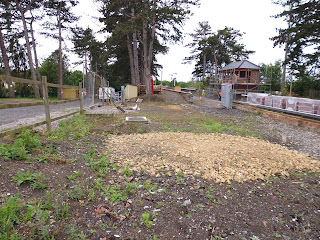 Clive and the Saturday gang did a superb job in removing the old bric-a-brac shed and clearing the site where the new station will be built. This is a view looking south with the relocated electrical box on the right. More on the station building later, 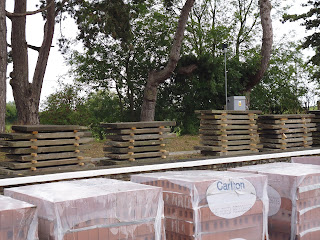 On Monday we took a delivery of the old coping slabs from Cheltenham Race Course station. These will be used to complete platform 2C, the gap in front of the signal box and eventually the main entrance to the track bed.
This brings us up to date with the work undertaken over the past few weeks. As you will have seen much has been achieved.
Now to give you an update on todays work 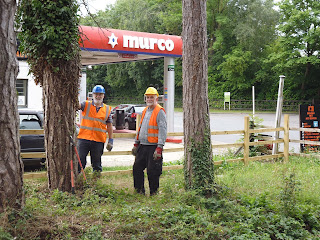 Chris and Ian are seen here at work removing many years of ivy growth on the pine trees inside the realigned boundary adjacent to the Station Road garage. This area will greatly improve the approach to the Station. Vic continued with tending his garden area which is looking very well indeed.
﻿
﻿
﻿ 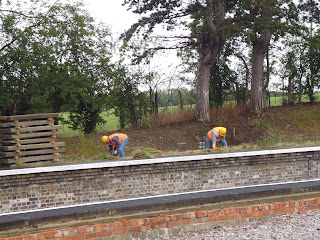 Rod, Terry and David spent the morning clearing the weeds that had grown on platform 2, The area now looks very neat and tidy. After lunch Rod and Terry continued with their Herculean task of clearing the French drains at the far end of the track bed. It is a very labour intensive task but will restore the drainage at the northern boundary. 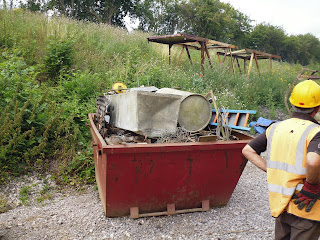 Steve B took delivery of a skip in the morning and with others helpers managed to fill it with scrap metal collected from the site. We hope to get a few extra pounds for our funds for his efforts. More metal will be collected at a later date, 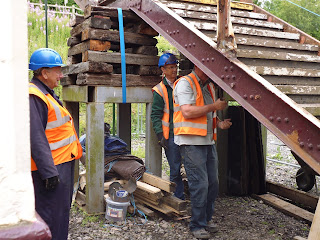 Down in the car park Dave, Ron and Brian continued with exploratory work on the Henley in Arden footbridge steps. It is not clear at the moment if it will be possible to use them due to the amount of corrosion present and a decision will be made in due course. 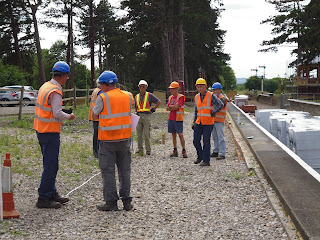 This is what we have all been waiting for! The team here are discussing the footprint for the new station building. When marked out it was shown to be a most impressive size, bigger than the original building due to the necessity to provide a café area and toilet facilities for our disabled visitors. 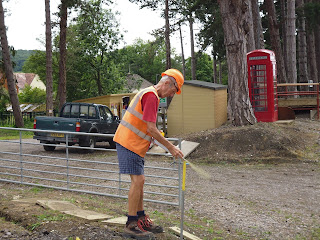 Gordon is marking out the southern end of the building and it gives a good indication of it's overall length; Gordon is standing behind where the information kiosk previously stood. Quotes have been sought for digging the foundations and concreting for the foundations and floor. It is hoped that a start will be made on these jobs in early August
This brings us right up to date with the work at Broadway. I am sure you will agree that much has been achieved and we look forward to the future with confidence. This is due to the excellent efforts of the Broadway Area Group volunteers, past and present.
And finally, a big thank you to Ray in the Steam Loco dept for his help in getting this blog up and running again.
Posted by BAGBLOG at 09:45