An amazing 21 volunteers turned up for work today and as far as can be remembered this is a record for a Saturday. Luckily we were blessed with a dry and fairly warm day which helped everyone in their chosen task. 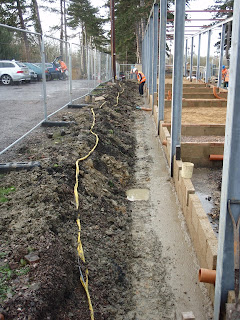 A number of sumps were dug by Peter S and others along the length of the building, this is the drive side, to enable the water, with a little encouragement, to soak away. The hope is that the concrete base will stay dry-ish over the rest of the weekend and allow the brickies to lay blocks along the length of this elevation on Monday morning. 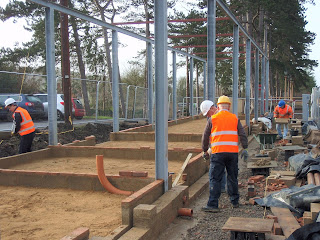 Once the worst of the water was on its way the three bricklayers in today, Bob, Tony and John, made a start on laying the usual concrete blocks but, today, with the aim of raising the front wall up to the split brick level. What a difference to last Wednesday when the temperature didn't get above freezing all day. 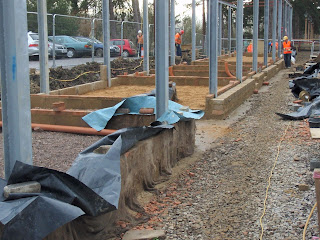 A pleasing view looking south later in the day shows that this ambition was achieved and there was still time to extend this along the gable at the far end and lay a few blocks on the first course coming back along the wall on the drive side.
Around this time of day newly appointed Broadway station master, Roger Wyton, visited to have a looksee at his future domain and a chat to some of those working on site. 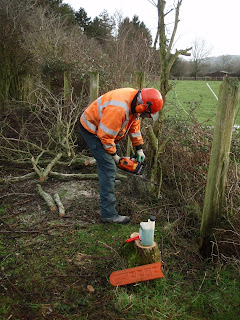 Elsewhere on site, Jo was putting his newly acquired chainsaw skills into practice by continuing the clearance of the cutting sides to the north of the station, on this occasion working the boundary on the eastern side.
Some of the volunteers on the Railway refer to the different sides as Cotswold side or Malvern side. This is the Cotswold side. 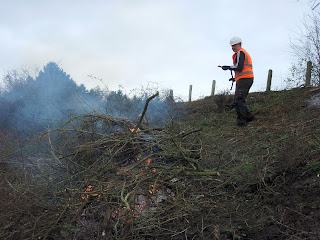 Jo was assisted by Phil, who was also on bonfire duty, Vic & Steve. Steve later took over the chainsaw. This clearance exercise is allowing access to the life expired fence posts that were installed goodness knows when and are generally made from old sleepers.
Steve, along with Pat, also found time to survey the maintenance needs of the plant and equipment on site. A good job well done. 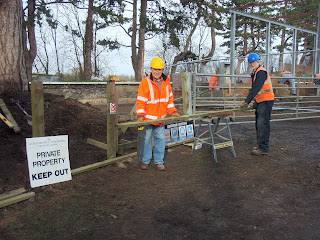 John B and Stuart started work on the long awaited pedestrian gate to the left of the main entrance. By this stage the holes for the new gate posts had been dug out by hand and the posts concreted in with the pair trimming the old fence rails to the new length. In the right background progress on the station south end gable wall can just be made out. 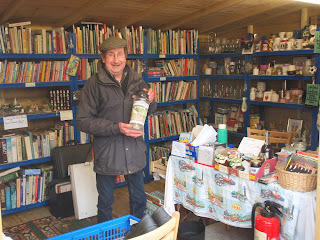 Jim was on duty in the bric-a-brac shed today and had a reasonable day for the time of year. 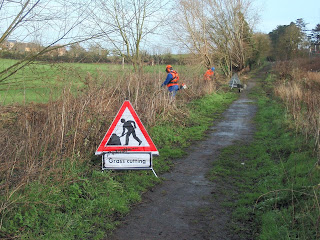 Men at Work! Another activity benefitting from the recent training courses is the upkeep of the drainage ditch running through the carpark. Keith G is the man under the helmet ably assisted by Roger J, in the background, and Peter K clearing the arising and building them into a bonfire for disposal another day. This operation transforms this area of the carpark and makes it look cared for in addition to the benefit to the drainage. 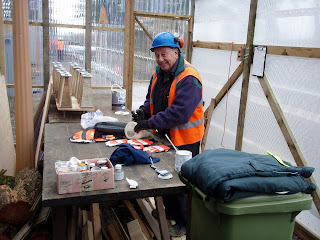 Storeman Brian taking a break from painting woodwork to put identification marks on the newly acquired chainsaw and strimmer safety equipment. The cones at the far end of the bench are waiting to be used on the footbridge foundations and are to hold the fixing bolts in place during the concrete pour. 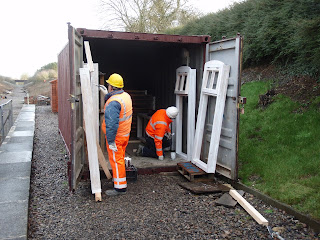 Prior to working in the stores Brian had been assisting Mike and Keith S applying the second coat of primer to the station window frames, at least the paint had a chance to dry today. Mike must be the senior painter in this group judging by the number of stripes on his arm or maybe just the longest serving!
Posted by Unknown at 10:26